Join us for a taste of TromsØ, the Arctic capital formerly known as the "Paris of the North" 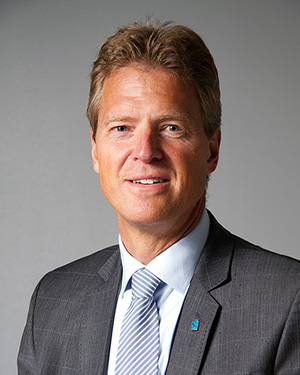 "By choosing Tromsø as venue for the WPC Leadership Conference 2015, WPC reaffirms that Tromsø is the city for great occasions. Warmly welcome to the Capital of the Arctic under the midnight sun!"
Jens Johan Hjort Mayor of Tromsø

Tromsø, the capital of the Arctic, is located 350 km north of the Arctic Circle and is surrounded by beautiful fjords and mountains. Tromsø is among the best places on earth to experience the Midnight Sun and observe the northern lights - Aurora Borealis, during the winter.

ENJOY THE MIDNIGHT SUN AND EXPERIENCE DRAMATIC SCENERY IN TROMSØ

During May and the days around the 'WPC Leadership Conference' benefit from the amazing phenomena of the 'Midnight Sun'. From the 20st May through to the 22nd July the sun does not set in Tromsø. The whole sun is above the horizon in this period. On nice days this is absolutely fantastic. Albeit a bit hard to sleep – but then again, who needs sleep when you can sit on the beach in the sun at 3am in the morning? 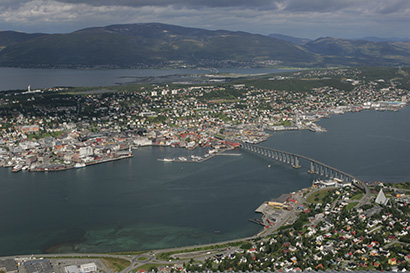 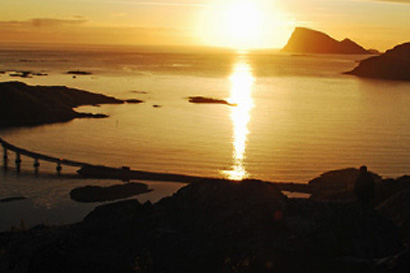 Acclaimed by National Geographic magazine as “the best unspoiled travel destinations in the world’’, the fjords are nature’s own work of art, formed when the glaciers retreated, and sea water flooded the U-shaped valleys. The region of Tromsø is famous for easily accessible fjords and mountains. The area offers activities such as hiking, glacier walking, fishing and cycling.

Tromsøfilmen from Rød Tråd on Vimeo.

WHAT TO SEE IN AND AROUND TROMSØ 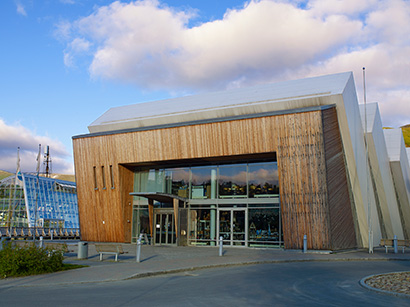 Starting in the south of the town centre, you find the famous Polaria centre which is built to resemble blocks of ice culling into the sea. Here you can learn about the fauna and animal life in the Arctic, watch a beautiful film about Spitzbergen and meet the resident seals living in its aquarium. 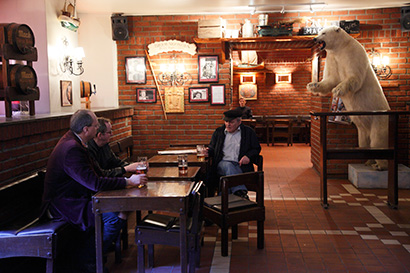 Continuing north along the high street, just before you get into the town centre you will find the Mack brewery. This is the world's northernmost brewery, so you should definitely stop off for a cheeky pint in the Oelhallen pub, the oldest in Tromsø. It is conveniently placed in the same building as the brewery and they open the doors at 9am!

Further north along the high street you will come to the Tromsø Cathedral. The church was built in 1861 and is the only wooden cathedral in Norway. Continuing past the church you will see the local bank building (Sparebank 1 Nord-Norge) which is one of the prettiest buildings in Tromsø, built in art nouveau style. if you look up to your left as you continue further along the high street, the grand Kongsbakken school lies at the top of the hill, and is built in similar style. 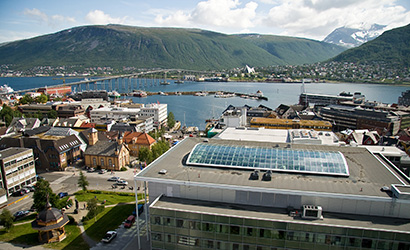 Still on the high street, you will now have entered the pedestrianised part of it, which makes for a pleasant stroll down towards the lively main square in Tromsø.

This is where you will find numerous stalls selling everything from Sami handicrafts and locally grown vegetables, to Thai spring rolls and seal skin waistcoats.

Make sure you notice the tiny kiosk, nicknamed "the rocket kiosk" on your left, it surely must be one of the smallest shops in the world! 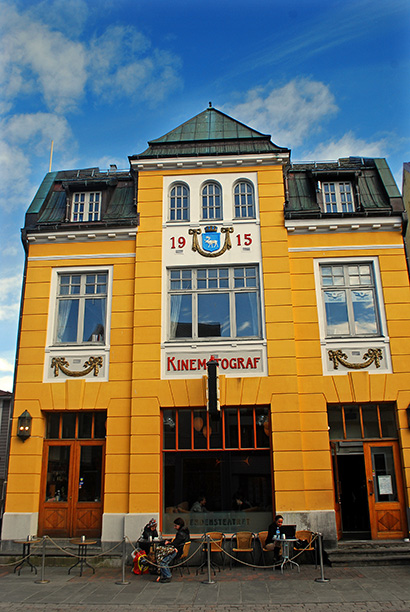 Just before the high street ends you will come to Verdensteateret (The World Theatre) on your right. This is actually Norway's oldest running cinema, and has a cozy cafe/bar in the front. It is well worth a stop for a coffee and a look around. The place also gets lively in the evenings, with DJs and special events such as live streaming of Operas from around the world. 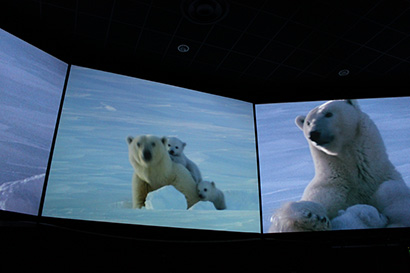 If you keep to the left as you come out of the high street, and then take a left across Skippergata and onto Sonde Tollbodgate you will get to the infamous Polar Museum. Here you can learn more about how life in the Arctic used to be, particularly focusing on hunting. This museum is not for the faint-hearted, but it is a very interesting look into the reality of life and survival in the Arctic. Across the road, you will find the Skansen building, Tromsø's oldest. In the summer there is a cafe here well worth visiting for some lunch or a drink. This area also hosts some of the oldest houses in Tromsø, and the street opposite Skansen is a picture of how Tromsø looked in the old days. 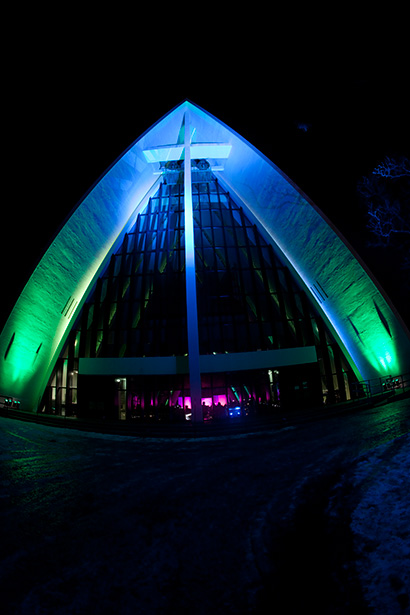 If you still feel up for it, it is not too far to continue north to the Tromsø sound bridge that leads to the mainland. The walk across takes about 20minutes. On the other side you will be met by the magnificent Arctic Cathedral, featured in most postcards from Tromsø.

The iconic church was built in 1965 and resembles a giant ice berg. Inside you will find a massive glass mosaic by artist Visctor Sparre. The Arctic Cathedral hosts many concerts throughout the year. 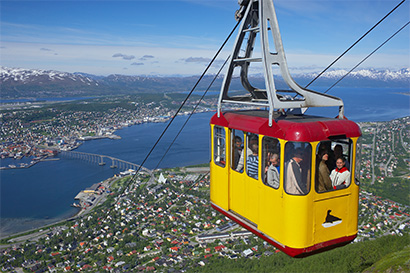 A trip up to Floya with the cable car is compulsory - the view of the sun and the city is amazing. And - remember to bring sunglasses if you go out in the evening!

in Tromsø you will find the northernmost botanical garden in the world - recently featured in the BBC programme Around the World in 80 Gardens.

If you have a car, it is well worth heading across to Kvaloya and drive out towards the scenic spots at Hella and Sommaroy. Hella is a popular spot for fishing, as the strong Rya current runs past this idyllic spot. Just before you get to Hella you can stop and look at some old petroglyphs dating back 8,000 years. Further out, Sommaroya is one of the most scenic spots around Tromsø. This small island has some great white sand beaches and a popular hotel.

See Tromsø and the surrounding landscapes in the beautiful blue light on board a warm and comfortable boat with a good viewing deck to give you a memorable experience. If we are lucky you might see the White Tale Eagle and small porpoises on the route.

The history of Tromsø and the areas around go all the way back to the ice age. Through the decades the town has grown rapidly, but many places you can still experience the city's foregone years and varied history.

People have been living in the Tromsø region since the end of the ice age. Way back then it was the Sami people that first braved the arctic, settling down in the fjords. In those first years the Samis pretty much had the area to themselves, fishing and living off the lands as the ice melted away.

Around AD890 the Vikings came to the area. Remnants of settlements from the Iron Age have been found on the South-Western side of Kvaloya and also on the Tromsø island itself.

Tromsø likes to front everything which it has ‘the northernmost’ of. This goes all the way back to the 13th century, when the northernmost church in the world was built in the city in 1252.

Around the same time as the church was built, the islanders felt the need to build a turf rampart, to protect the inhabitants from raids from Russia and Karelia. This rampart, called Skansen, today hosts the oldest house in Tromsø , Tollbua. Tollbua was built in 1789, as the trade monopoly in Bergen ceased to exist. This meant that people in Northern-Norway could trade with anyone, and Tromsø as a trade hub was born.

In 1794 Tromsø was awarded city status. The fact that there were only about 80 people living in the city didn’t seem to curb people’s urban aspirations. In the 1800’s Tromsø got the nickname ‘Paris of the North’.

It might be hard to believe as you wander among the Gore-Tex-clad people of Tromsø on a late Saturday night today, but 200 years ago, visitors were surprised to find such a fashionable, well spoken and cultural little place.

During the Napoleonic wars, times were hard in Tromsø , as in the rest of Norway. In 1812 the English attacked the city. In the battle at Poelsehavna (in English: Battle at the Sausage Port) the Danish-Norwegian troops held their ground, and put the Brits off attempting to enter the city. It was during these times Tromsø grew to become the “Gateway to the Arctic”. The Pomor-trade with Russia became increasingly important, and the trade in fish, seal and whale products from the Arctic Ocean reached from Arkhangelsk in the North to Bordeaux in the South.

Tromsø’s growing expertise in arctic hunting and arctic weather conditions also meant that the city became a natural starting point for Arctic explorers. Roald Amundsen, Umberto Nobile and Fritjof Nansen all spent time in Tromsø, and Amundsen’s expedition to the North Pole in 1926 set off from Tromsø.

OTHER SUSTAINABLE DESTINATIONS IN NORWAY

The former mining town of Røros is simply unique - a modern community, in which people live and work right in the middle of an UNESCO Heritage Site.

Just south of the Arctic Circle in Norway you will find the Vega Archipelago, a cluster of dozens of UNESCO-protected islands.

Lærdal by the Sognefjord

Lærdal, situated at the end of the Sognefjord, boasts attractions like Borgund Stave Church and the old Gamle Lærdalsøyri Village.

Trysil is Norway's largest ski resort with 66 slopes and 31 lifts. Trysil is family friendly, and in summer offers more than 30 activities.